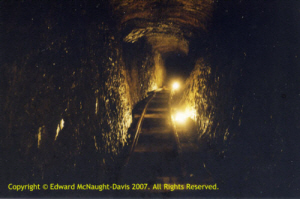 Read about the Roman Miner Ghost at the  Dolaucothi (or Lampeter) Goldmine visited by the spiritual psychic medium, Edward McNaught-Davis

The Lampeter Goldmine or The Dolaucothi Goldmine, as it should be known, lies close to the village of Pumsaint on the A482 between Llanwrda and Lampeter in mid-West Wales.

Its precise location is given as Grid Ref. SN664402. The Goldmine was mined extensively by the Romans although some archaeologists believe it was almost certainly mined during prehistoric times but no real evidence has surfaced yet to support that theory.

The site of the old goldmine is now managed by the National Trust. Visitors to the site are able to experience the working conditions of the goldmine first hand in order to get a feel in which Roman gold miners worked about 2000 years ago. Nearby a Roman camp was situated at Pont Llanio.

The author of this article, Edward McNaught-Davis, visited the Dolaucothi Goldmine as a tourist during August 2000. Edward, being tall, had immense difficulty in walking along the underground tunnels and often he had to crawl to avoid banging his helmeted head on the tunnel rocks. Eventually, Edward became detached from the main tour group due to his slowness of trying to keep up with them. The torch on Edward’s mining helmet was not the brightest of lights and it barely illuminated the way forward. After a few minutes of crawling through a long, wet and dirty tunnel, Edward came to a junction and found that he could stand up. He extracted his Olympus XA2 compact camera from his jacket pocket and took a picture of the tunnel ahead of him which was dimly lit with small lights on the tunnel sides.

The photograph (100 ASA Colour) was just meant to act as a reference and memory jogger of his seemingly long crawl on hands and knees.

Before the start of the tour, the tour guide did make a joking reference about a ghost of a Roman Miner but admitted that he had never seen it.

A few weeks after Edward’s visit to the Dolaucothi Goldmine, Edward had his film processed and was astonished to see the picture shown as Figure 1. At first glance you might not be able to see what Edward first saw and so you should consider the diagram in figure 2.

It might help to stand back from your PC screen too in order to “see” the Roman miner’s helmeted face.

As a practising spiritual psychic medium, Edward also studies the paranormal and supernatural. From his extensive experience and research into spirits/ghosts, he knows that those spirit entities who lack the required energy to materialise will use or borrow other forms of light and shadows to make themselves known. Clearly this seems to be the case here. Obviously, it could be a coincidence but from Edward’s extensive experience of metaphysical matters this seems unlikely.

A copy of the Roman Ghost photos as shown in figure 1. and figure 2. are displayed within the Dolaucothi Goldmine by kind permission of Edward McNaught-Davis.

Did You Enjoy Reading This Article?

If you would like to share this article then please copy and paste the link code  below to your web page or blog: